Rumours of gun touting poachers, police brutality and government corruption - the South African fishing industry has it all.

The poachers of Cape Town are commonly perceived as gun waving mercenaries of the sea - only interested in getting rich and destroying any chance of sustainable fisheries in the process. Many of these fishermen have lived off the ocean for generations - with their small boats they would head to sea and bring back just enough to sustain their families and make a little profit. So what has driven them to poach?

Meet Hout Bay's poachers and find out why they poach.

Poaching at night is the only way these people can operate.

Every time the poachers set out to sea at night, they risk their lives to dive for the highly prized perlemoen , also known as 'white gold'.

The journey over the mountain to their launch site is done in the middle of the night and made without lights of any kind, to avoid drawing attention to themselves in the otherwise dark landscape. Ten-year-old phones act as their lines to the outside world, should anything go wrong. The old mobile technology means that the authorities cannot trace them through their phones signal, as would be possible with the newer android models.

This journey is perilous in the dark and has resulted in many injuries and even a couple of deaths.

The rocky pathway is rough and descends steeply down the mountain until it reaches what locals have dubbed 'pearly beach', named for the thousands of perlemoen shells strewn across the rocks.

Waiting for them at the bottom of the path, tucked in the rocks alongside the shattered remains of past vessels, are their small fiberglass and inflatable boats.

Long-established poacher, Ralph Hendrix, took me on this journey one day. As we trekked up and down the mountain he talked to me about what it is that he does and the problems he faces. "We ourselves, due to our circumstances, are busy killing our own resources!"

“Basically once the fish is gone, then there is no work so you got to get other alternatives to make money.”

"Poaching was created because people who have been fishing all their lives have had their licences taken away from them."

Ex-Spokes person for the fisheries

Dozens of poachers loose their lives at sea each year.

Once the poachers and their carriers arrive on the beach, the next and more daunting step is the fishing its self.

Entering the turbulent seas at night to dive for perlemoen is a risky business, and whether it is done to support a family or, as fisheries expert Shaheen Moolla believes, out of greed, the fact remains that some poachers will not return home.

Spokes person for the poachers in Hout Bay, Angelo Joseph, showed me photographs of the many men they have lost at sea - in the last year. The youngest poacher lost was eleven years old.

"If we even smell like perlemoen they beat us!"

Another problem facing the poachers are occasional encounters with members of law enforcement.

Police brutality is a common allegation in the fishing circles of Hout Bay.

The fishermen say that the police have no-tolerance for suspected poachers and often use violence as a deterrent.

“If police find us, if they even smell perlemoen on us they beat us, kick us and then lock us up in the nearest cell,” Angelo Joseph.

Involvement in illegal fishing can result in a jail term of up to 25 years and fines starting at R2500 (£139) , according to the senior marine conservation inspector in Hout Bay, Mel Hunter.

In practice, however, the repercussions and punishment for breaking the law vary.

"Poaching is not taken as a very serious crime here. Most of the time they are caught over the weekend and just held in jail over night until their court appearance on the Monday," said Hunter.

The severity of the fine depends on the amount of perlemoen you are caught with, it is very rare that someone will receive a jail term of 25 years - though it has happened, Hunter explained.

The legal procedure for apprehending poachers, on the other hand, is quite clear, Hunter assured me.

But, stories about police abusing suspects, before formally apprehending them, continue to come out of the woodwork.

"These things do happen," Hunter said, "I have not seen it personally but I have heard many stories and I have seen evidence of it on the poachers."

"To my recollection such cases have not been reported at our station," the spoke's person for the police commented.

"We only know about these stories when a case has been opened and formally investigated, but to my recollection such cases have not been reported at our station," Tanya said.

"Everybody has rights and if someone feels like they have been mistreated there is a number they can call to open a formal investigation," she added.

To formally lodge a complaint the victim must contact, the Independent Police Investigative Directorate (IPID) at (012) 399 0000.

Despite the threat of abuse, fines and jail sentences, however, the poachers are not deterred from heading out to sea.

Many have already served jail sentences and some are currently out on provisional bail.

“We need to provide food for our families,“ explained long-time poacher, Ralph Warner, "and all we know how to do is fish….”

The poachers can be dangerous too

“Sometimes you have to let go. You don’t want to loose your life. And it will come down to that,” Mel Hunter.

Poachers go out to sea in the early hours of the morning, and offload their catch before returning to the harbour. This makes catching them in the act unlikely unless the team receives a ‘tip-off’, senior marine conservation inspector, Mel Hunter, says.

Training has not been provided for her team for more than three years, Hunter adds. As a result there are few people on the team who have the skills to confront the poachers at sea.

“The poachers have rubber ducks and they’ve got their weapons on them,” said a law enforcement officer, who prefers to remain anonymous.

Not all of the poachers have firearms, he amended, but it is dangerous to go on live operations in search of them.

Officers need to know the dangers that are involved, and know how to defend themselves if necessary.

“These people have serious ammunition. They would not blink to hurt you. They’ll just go for it, because what you are doing is taking away their income. Taking away their livelihoods, stopping them from supporting their family. To them you are a stumbling block and they will eliminate you if they have the chance….whether they know you or not,” Hunter explains.

Hunter has been working in Hout Bay harbour for 8 years and has developed a relationship with the local poachers.

While they are not friends, she says that they have an understanding with her and in the past they have fully cooperated when she caught them.

Lack of resources and time constraints make it difficult to do her job, Hunter explained.

Her law enforcement team works from 7:30am - 4pm which means they arrive after the poachers have unloaded and before they set off again.

As only two members of their team have sea-going experience, they don't have the numbers of enforcement officers or clearance to take their boat on operations out of the harbour.

Sometimes there can be as many as ten divers in the water at 'pearly beach', and that is not including the carriers.

“We are not really effective in what we do, and that irks me,” she says.

The authorities and fishermen play a game of cat and mouse, they know who the poachers are and how they operate, but until they catch them in the act they cannot do anything about it.

Without a proper budget, training, access to firearms or numbers, Hunter says that her team is at a major disadvantage.

"We don't have the numbers to take on armed poachers - sometimes you have to let go. You don't want to loose your life, and it will come down to that."

Poaching and the drug trade

While most of Hout Bay's poachers claim to be subsistance fishermen, simply fishing to provide a livelihood for their families, officials tell another tale.

The poaching trade in South Africa has long been associated with the drug trade and in particular the Chinese Triads.

The perlemoen is taken out of the sea, at little expense, dried and then exchanged for drugs. 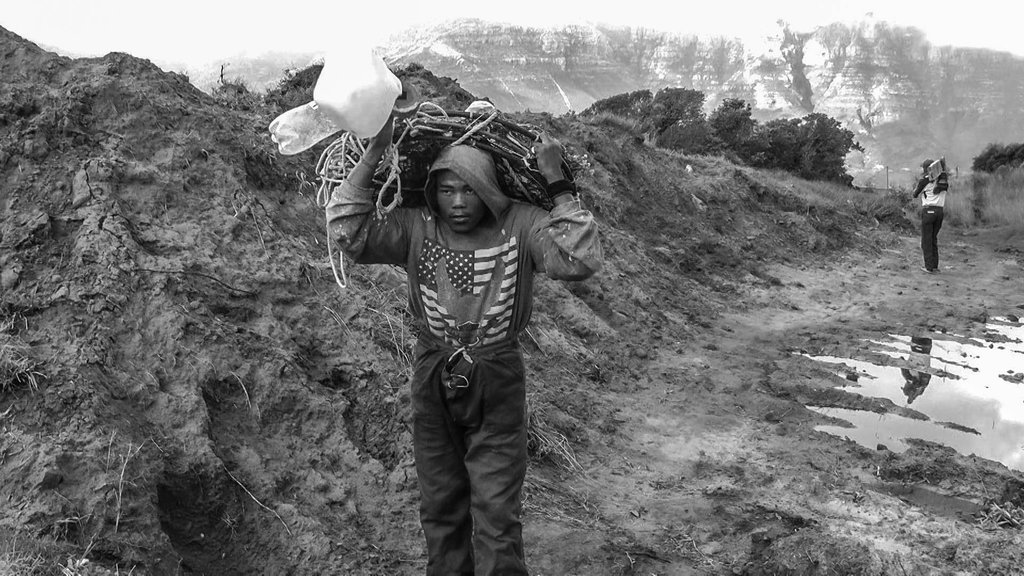 So while what, on the surface, may appear to be 'indigenous fishermen' poaching to put bread on the table, many are in reality tied-up in a transcontinental drug smuggling operation.

Perlemoen is in such high demand in Asia that it is considered 'white gold'.

On the South African black market perlemoen can fetch anywhere from R350-R400 a kilo, said Hunter.

In an economy where fishermen are struggling to find job's anywhere, this is a good financial incentive to do what their families have been doing for generations.

"Most of our buyers are Asian and they order perlemoen by the ton," Ralph Hendrix explained.

In 2005 the Institute for Security Studies conducted an investigation into the 'illicit abalone (perlemoen) trade in South Africa'.

Heading this study was Jonny Steinberg, who found that more perlemoen was being confiscated than was being commercially harvested.

Walking around Hout Bay's fishing village it is easy to spot those playing a large role in these smuggling operations.

One only needs to follow the money - and look for the luxury cars sitting next to the fishermen's beat up trucks.


"The department needs poaching to continue or they will go under" Moolla said.

As such, the small-scale fishermen have little faith that things will change in their favour any time soon.

Officials have been arrested for taking bribes and issuing free fishing rights to their friends.

"The reality is that we have really collapsed fisheries management in this country, because of mismanagement, institutional corruption, the fact that so many people are in charge of fisheries that know nothing about it."

Many fishermen and divers on South Africa's coast rely on small-scale fishing for their livelihoods. When this is taken away from them, it is a legitimate question to ask - what can we do now?

"Poaching in South Africa was made worse because people who have fished all of their lives have had their rights taken away from them. The licences are then given to people who have never fished in their lives. As less fish are being brought out of the sea, the price will go up and illegal fishing increases to meet the demand." said van Dalen

Corruption and mismanagement within the department of fisheries last year, lead to the 2013 fishing rights allocation process being thrown out, said Moolla. Now licences across 8 fishing sectors are on hold, until they can be re-considered for allocation.

Since 2005 the budget for the fisheries management team has gone down by around R90 million, according to Moolla.

He subsequently alleges that they are not adequately managing their resources and that the department needs the poaching industry to continue so that they can sell the perlemoen they confiscate.

"The department relies on the income from the abalone (perlemoen) to fund their activities - they need to profit from it to reduce their deficit" Moolla said.

The initial investment into applying for and paying for your fishing permits are steep and not something Cape Town's fishermen take lightly.

Rights holders pay R1071 for a small-scale near shore permit ,while to get a commercial licences it will cost upwards of R10,000.

While the department are getting their licences in order, many poachers, rights holders and officials are getting increasingly frustrated with the management of an industry that holds the fate of so many households in their hands.